Discovering the Impressionists: Paul Durand-Ruel and the New Painting 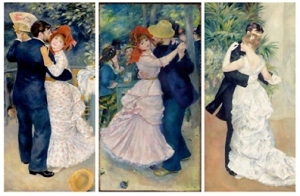 In July this year I attended a conference in Philadelphia.  On the last day of the conference before flying back to San Francisco,  I was glad that I had a few hours left to see this exhibition which I  had unfortunately missed in London on May 31, 2015, which  happened to be the last day of this show Inventing Impressionism in the National Gallery, and the first day of our UK vacation.  In Philly, the show was called  “Discovering the Impressionists: Paul Durand-Ruel and the New Painting”

In this extraordinary exhibition, there were paintings from museums all over the world including Musee d’Osay, Museum of Fine Arts Boston, Metropolitan Museum of Art etc. They were paintings of Monet, Renoir, Degas, Manet, Pissarro.  Although I had seen many Impressionists’ work in various  museums in the United States and Europe, it seemed to me that these were the extraordinary arising from the ordinary.  My favorites are these three Dance paintings of Pierre-Auguste Renoir. The Dance at Bougival was the one I had not seen before.  The other two: Dance in the Country and Dance in the City, which I saw some years ago at Musee d’Osay have always been my favorites.  To me, it was an emotional moment to see the three reunited.  These three paintings were bigger than life-size.  My eyes were glued at them for a very long time. I thought, when will they meet again after the show?  When will I see them again?

Hey, my friends! Bored by my self-muttering?  Let’s have some fun.  Here’s a trivia question for you.  What music did you hear?  Please share with me!

I'd love to hear your comments Cancel reply